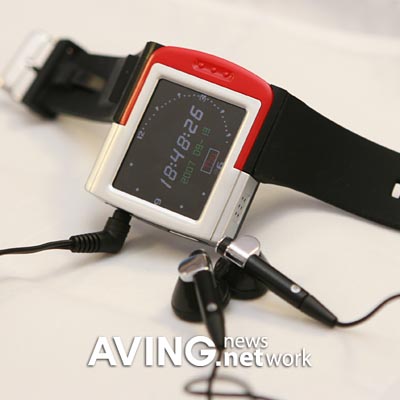 Don’t let the bed bugs bite. Given the quickly shrinking size of most portable electronics, wrist-worn gadgetry is very much becoming a reality beyond the realms of Agent 007. Narae Inter has created what they call the Dream Watch, a wrist-worn device that supports all sorts of different multimedia files.

Realistically, the gadget isn’t all that different from so many other MP4 players that preceded it, except for one notable feature: it comes with a wristband so that you can wear it like a fairly clunky watch. What’s more, it actually has a digital watch function above and beyond its video player, MP3 player, photo viewer, and voice recorder. It also serves as a USB flash drive when you’re in a crunch.

Rocking two gigabytes of internal memory and up to seven hours of music on a single 1.5 hour charge (four hours for video), the Narae Inter Dream Watch retails for “more than 100,000 KRW”, which works out to somewhere north of $108.