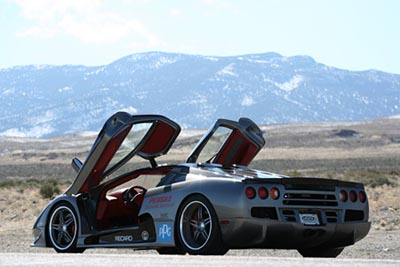 You thought the Porsche Carrera GT was impressive? You were stunned by the Bugatti Veyron? Neither of those supposed supercars have anything on the absolutely amazing Ultimate Aero TT from the folks at Shelby Supercars. They took the crazy car out for a run in the desert to prove a point and the video evidence provided below pretty much says the whole story.

The styling isn’t exactly revolutionary with its guillotine doors, super aerodynamic body, and giant wheels and brakes. But that’s not why you’d be interested in this car in the first place. What will attract your attention is the fact that Shelby Supercars’ Ultimate Aero TT gets its propulsion from a 6.0L V8 behemoth. That’s three-quarters of displacement per cylinder, folks. The net sum is 1183 horses of “try not to crap yourself” thrust.

After the dust settled, and all was said and done, the Ultimate Aero TT completed a run at 257.11 mph.