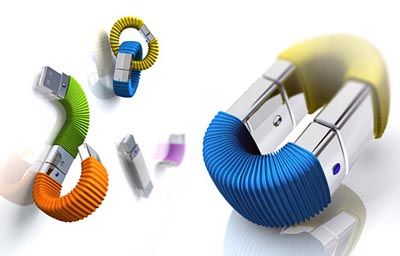 Don’t you hate it when you buy a USB flash drive, only to discover that you need more space? And wouldn’t it be cool if you could actually wear all that memory without having to rely on a flimsy lanyard? The concept may look a little funky, but I think there really is something to the Memory Infinite USB flash drive concept. You can daisy chain as many of these drives together as you can afford.

On one of the unit you get a USB male connector, whereas the other end has a female connector. In this way, you can connect a series of these Memory Infinite devices together to produce a near infinite amount of storage capacity. What’s more, when you plug the entire contraption into your computer, it shows up as a single unified drive. And the bodies are ultra flexible too, sort of like Gumby.

Naturally, there are several problems that could arise from such a solution. If you have a single large file, wouldn’t this mean that it would be split up over several units? Even if you had all small files, it would impossible for you to know which drive is holding on to a particular chunk of data. Didn’t really think this out, did you Vicky Wei?