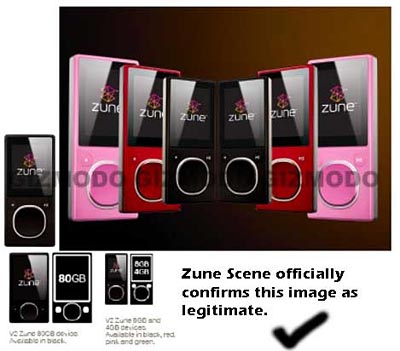 The next-generation of Apple iPod players has arrived. People are clamoring over the cuteness of the new iPod nano and the sleekness of the iPod touch. Microsoft must respond to the new iPods and apparently they’re going to do it on October 16th with a new family of Zune portable media players.

This is according to Nate from Zune Scene, although Bill Gates hasn’t officially confirmed anything at this point, nor has anyone from Microsoft. The other rather major news accompanying this leaked date is the confirmation, again by Nate, that the picture you see here is the Zune 2 and the Flash Zune. You’ll notice that the new Zune has what appears to be bigger controls and a smaller screen.

Do you think this is enough for MS to topple the Apple music playing juggernaut?