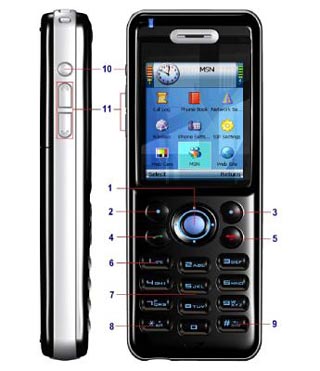 At first glance, the Huawei E800 looks like any other candybar phone. It’s reasonably at just 18mm of thickness, it’s got a 2.2-inch QVGA display, and it seems to have a trackball navigator similar to that found on the BlackBerry Pearl. The one thing that might serve as a bit of speed bump for buyers, however, is that the Huawei E800 seems to lack any cellular radios altogether, instead focusing its energies on the world of VoIP.

More specifically, the Huawei E800 phone is compatible with Skype, including presence, Skype Talk, and SkypeOut. It will also work with MSN, apparently, as well as IP TV, IP radio, webcam streaming, SIP v2, and SDP. And yes, it handles 3-way conferencing, caller ID, and speed dial as well.

The operating system is Windows CE, so you can probably handle some funky 3rd party apps too. No word on pricing.