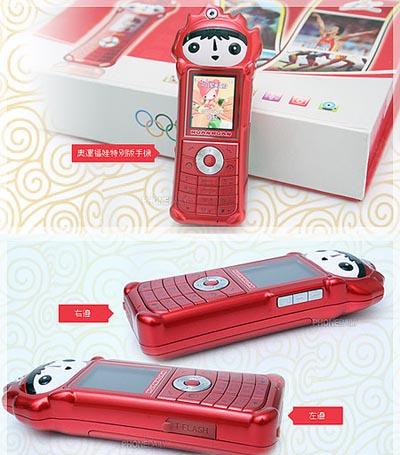 There’s a lot of ways that you can go about promoting a world event like the 2008 Summer Olympics. Cect Mobile has decided that they’re going to rebrand a Nokia Series 40 phone to commemorate the games, but I feel the giant head popping out the top could be a little distracting. That and it’s just downright creepy.

The unnamed cell phone features the official mascot of the 2008 Beijing Olympics and that’s where there’s a giant head protruding. Fuwa Huanhuan is his name and I can feel his eyes boring a hole through the front of my skull. On the back of the phone are the Olympic rings and a giant bump that “makes carrying the phone in tight jeans almost impossible.”

If the cuteness isn’t a selling factor for you, the features most certainly won’t be either. You get a 1.3 megapixel camera, 1.5-inch screen, expandable memory, and an integrated media player, as well as Olympic-themed content. Available in China only.