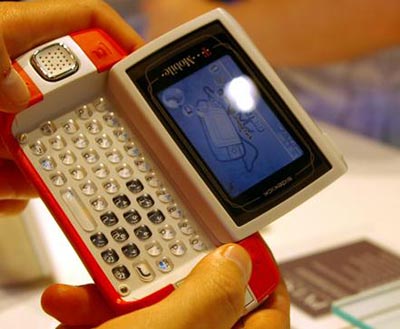 There has been no official confirmation from either Sharp or T-Mobile, but this cell phone on display at IFA 2007 could very well be the Sidekick 4. If you look closely at the picture, you’ll notice that it has both the T-Mobile and Sidekick badging on it, flanking the display on either side.

At the IFA 2007 show in Berlin, the handset was being bandied about as the Sharp PV150, but with that swivel-up color display, full QWERTY keyboard, and what appears to be the signature Danger OS, we’re pretty sure it’s a Sidekick. It’s also possible that it’s not the SK4, per se, but just another addition to that family, following the same line of thought as the Sidekick ID and the Sidekick Slide (Motorola Zante).