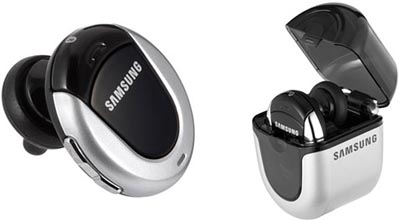 Talk about miniaturization. Everything is getting smaller these days and Bluetooth headsets are no exception, as evidenced by the Samsung WEP200. According to the company, this wireless earpiece has about the same footprint as a quarter, weighing in at a barely noticeable nine grams.

The tiny contraption obviously isn’t without its faults, however. In fact, just like most other things that have been reduced in size, the Samsung WEP500 Bluetooth headset suffers from some rather deplorable battery life. We hear that talk time is rated at a mere 3.5 hours, whereas standby dies out at 80 hours. Not the best by any standard.

To compensate for its lack of longevity, the Samsung WEP500 features dual microphones, noise reduction, and a funky carrying case. All this for the available-now price of $119.