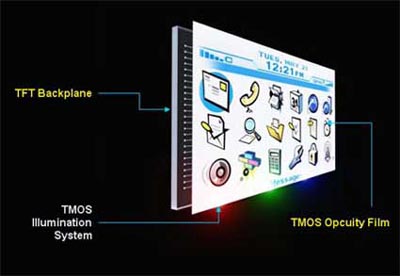 Cell phones are more than just cell phones these days. As we push toward thinner and thinner devices that have become proverbial Swiss Army knives, battery life is severely suffering. Between taking pictures, listening to music, and surfing the web, you can barely make it through the day without tethering yourself to the wall. What is the multitasking user on the bleeding edge of technology to do?

Unipixel is aiming to create a new display for mobile phones that will effectively double the battery life. And there are no sacrifices on your part. You see, with current displays, only 5% of the light generated by the backlight ever makes it to the screen. This is due to a series of filters and light polarizers. The Unipixel solution aims to attack this inefficiency, creating a display that is illuminated by LED lights on the sides. No filters, more brightness.

A working prototype is expected by the end of the year. Until then, Unipixel’s revolutionary display is just vaporware.