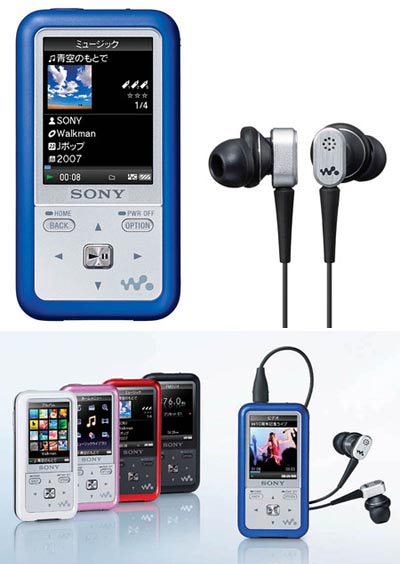 Hot on the heels of the new iPod nano, Sony has announced a pair of portable media players that seem to be approaching a similar segment of the market. The relatively compact Sony NW-S710F and NW-S610F Video Walkman players are clearly larger than the nano at 79.5x42x11.5mm and 50 grams, but they’re still not exactly huge either.

The two Sony players are fundamentally identical, except for the fact that the slightly higher end NW-S710F comes with noise canceling technology that can be controlled via a toggle switch on the top. The 1.8-inch QVGA display can handle MPEG-4 AVC/H.264 video when you’re not jamming away to MP3, WMA, and ATRAC tunes. There’s also a “search engine” and an FM radio.

Battery life is equally impressive at 33 hours of audio and 9.5 hours of video. The NW-S610F will come in 2GB and 4GB varieties, whereas the NW-S710F will ship in 2GB, 4GB, and 8GB flavors. It’s also notable that the former will be available in pink, black and blue, whereas the latter adds red and white as options too.

Pricing will range from $135 to $250 when the new Sony Walkmans ship to Japan on October 20th.