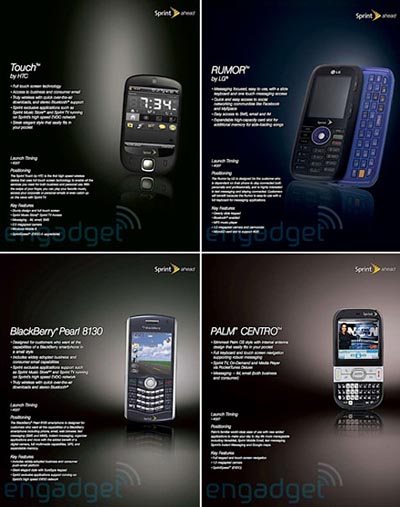 It looks like the business handheld end of things at Sprint is about to get a lot more fashionable, because we’ve caught word that at least three fashionable phones will be heading to Sprint in Q4 of this year.

As you can see through the image here, the roadmap seems to call for the HTC Touch, the BlackBerry Pearl 8130, and the Palm Centro, as well as the LG Rumor. The LG is probably the least interesting of the bunch.

The Palm Centro has been seen with Sprint branding before, as has the HTC Touch, but this is the first time we’ve seen the Pearl 8130 with Sprint’s logo. As you may know, the 8130 doesn’t have WiFi, but it does have GPS and EV-DO. It’s also notable that the HTC Touch is EV-DO Rev.A upgradeable.