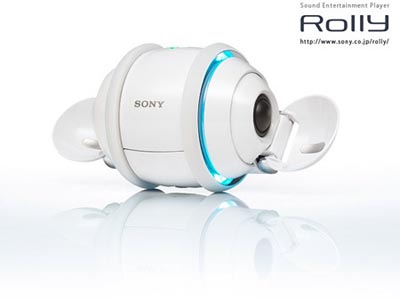 The glossy white appearance may lead you to believe that this is an Apple creation, but the Sony Rolly has nothing to do with the Cupertino company. Instead, the Rolly “Sound Entertainment Player” is the brainchild of some goofs at Sony who thought a rolling music player would go over well with the masses.

Inside, you’ll find 1GB of internal memory and Bluetooth. They say that it’s supposed to groove to the music and you can actually choreograph the Sony Rolly to work with fellow Rolly owners on the Internet. Battery life for music alone rings in at five hours. Add in the dancing aspect and that gets diminished to four hours. Knock off an additional half hour if you want to take advantage of Bluetooth too.

Check out the video to see the Rolly in action.