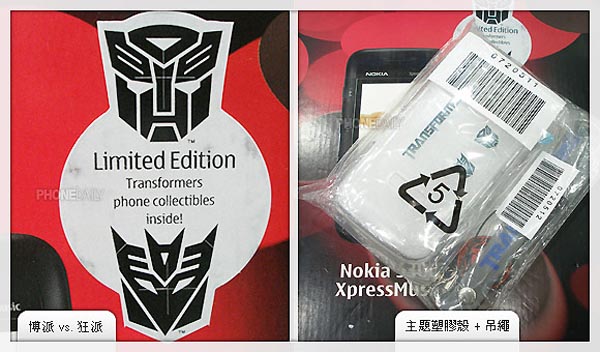 The Nokia 5300 isn’t exactly a new phone, being announced back in September 2006 and getting picked up by T-Mobile in March 2007. So, what do you do when interest starts to wane in your music-centric handset? You push out a special edition, of course!

The Limited Edition Nokia 5300 Transformers Mobile Phone is supposed to be more than meets the eye, but in the end, it’s just the regular Noka 5300 XpressMusic phone in an Autobot-themed casing. The features remain the same, so you still get dedicated music controls flanking the QVGA color display, a 1.3 megapixel camera, Bluetooth 2.0, FM radio, and microSD expansion.

You know, if they launched the Nokia 5300 Transformers Edition to coincide with the movie’s release earlier this summer, it probably would have sold better. Interest is waning in the movie as well, so this could simply be too little, too late.