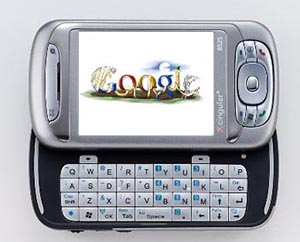 I think that the Apple iPhone was garnering more attention and creating more rumors than the Google Phone, but interest in the latter is really start to ramp up now that the former is already out in the marketplace (with a price drop too). Five fresh rumors have arisen surrounding the secretive Google Phone, but unfortunately none point toward a potential release date.

The most interesting rumor is that the Google Phone will not be running on Windows Mobile like all over HTC-produced smartphones and Pocket PC Phones. Instead, it will get treated to a Linux system similar to that offered on certain Motorola phones. All applications will be Java-based, including the multimedia player. Continuing with Java, there will also be a Java-based search box to help you find whatever you need on the phone. The web browser is grounded in Java as well.

Last but not least, there was initially only one prototype, but Google and HTC have since gone on to place the mobile OS on “between 3 and 5 devices, all of which rock the QWERTY.”