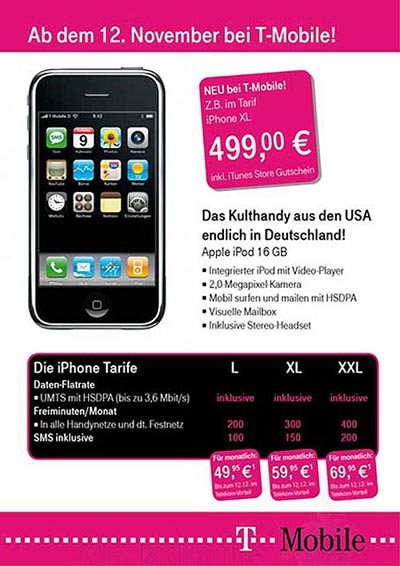 While Europe may be a little late to the iPhone party, it seems that the handset they’re getting is substantially more powerful than its American counterpart. Based on this leaked print ad from T-Mobile Germany, the Euro-bound Apple iPhone gets a memory boost to 16 gigabytes of internal storage.

To induce even more salivating and envy on the part of American iPhone owners, it seems like the German iPhone will also come equipped with an ultra-speedy 3G data connection. The UMTS/HSDPA radio will send data over in much more efficient manner — up to 3.6Mbps — than the EDGE connection that AT&T in the States offers. The rest of the specs sound similar, though, like the 2.0 megapixel camera, visual voicemail, and integrated iPod functionality.

The beefed up iPhone will reportedly sell for 499 Euros, which works to about US$687, starting in November. You can also see three calling plans in the ad as well.