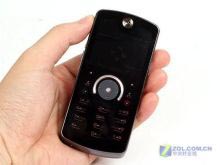 Although I’ve never been a huge fan of the ROKR series from Motorola, I’ve got to admit that they’re being persistent. The telecommunications giant has just unveiled the latest addition to their music-oriented family, showing off the Motorola ROKR E8 to the world. They managed to keep the profile nice and slim like the SLVR, but the front is said to be distinctly different from anything you’ve seen before.

You don’t get usual buttons for the keypad, getting treated instead to “buds” over a flat surface. The characters “must be illuminated to show.” In this way, you can think of the keys as being something like the touch sensitive controls you’ve seen on other phones, except for the fact that they’re not exactly touch sensitive. This allows the “buds” to adapt to the situation; from what I understand, the numerical keypad transforms into musical controls when the multimedia player is launched.

The OS on-board is said to be the new Linux-Java number. Other vitals include a QVGA landscape display, microSD expansion, stereo Bluetooth, 3.5mm jack, microUSB connectivity, and a 2MP camera.