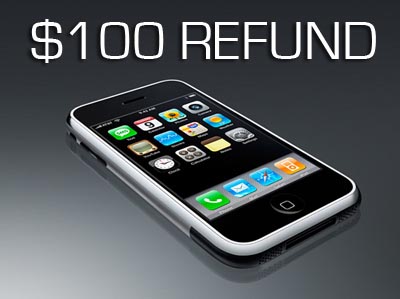 You know Steve Jobs has decided to offer a $200 price cut on the 8GB iPhone? Obviously, this upsets many early adopters, because they feel like they were ripped off and paid too much for the multi-touchtastic cell phone. Don’t worry. His Royal Steveness has heard your pleas, because in an open letter, the Apple CEO announced that all current iPhone owners are entitled to $100 refund.

Well, it’s not really a refund. If you own an iPhone, you’ll get $100 back in Apple store credit and you can spend this on a new iPod Shuffle or something. I’d imagine that you can’t apply it to your AT&T bill.

Sure, an extra $100 — even it’s store credit — is a nice gesture, but doesn’t that still mean that you paid $100 too much? What’s Jobs trying to pull here? Read the open letter in its entirety for full details.