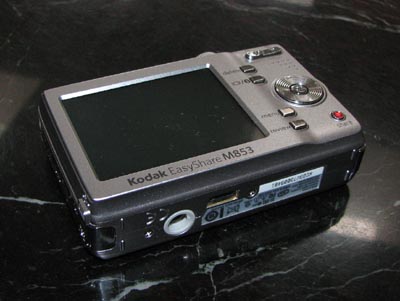 When I was (a lot) younger, my parents would tell me that Kodak was the gold standard when it came to selecting film for our cameras. Their 35mm film may have cost more than other brands, but we trusted that yellow packaging, because the pictures always came out best when we used Kodak instead of other brands. In the digital age, I’ve found that Kodak — as a digital camera maker — has fallen behind the times, because their focus has always been on film and not on hardware. Instead of being among the most expensive, Kodak digital cameras are usually at the lower end of the spectrum with pricing to match. I’ve had the opportunity to toy with the Kodak EasyShare M853 digital camera for a little over a week now, and while I am reasonably impressed with the build quality and amount of features, some of the photos came out being less than impressive. It’s not all bad, of course. Initial Impressions The Kodak EasyShare M853 comes equipped with a high-resolution 8.2 megapixel image sensor, giving you enough pixels to print some rather huge photographs. In fact, they claim that you’ll be able to produce prints as large as 30″ x 40″. Like most other consumer-level digital cameras in its range, the M853 also offers 3x optical zoom, which gets bumped up to 5x with the continuous advanced digital zoom. The zoom lens was smooth and easy to operate with the thumb-based rocker key located at the top-right of the camera back. Other notable features include a 2.5-inch color LCD (there’s no conventional viewfinder), built-in lens protection, flash, shutter speeds ranging from 4 to 1/1400 seconds, 5-point multi-zone autofocus, ISO 80-1250, four white balance settings plus auto, flash, several scene modes, VGA video at 15fps, and a focus range from 5.9 inches to infinity, when the macro mode is taken into account. In terms of build quality and materials, the Kodak EasyShare M853 felt sold in my hand with enough weight that it didn’t feel “cheap” in any way. They appear to have used some combination of plastic and aluminum for the most part. The review unit that I received was Arctic Silver — a fairly standard color scheme — but the camera is also available in Graphite, Espresso, Snow, and Red Rose.

Usability Given that this camera is clearly being targeted at casual picture takers, it makes sense that Kodak wanted to make the EasyShare M853 as intuitive as possible. Whether your a soccer mom, a technophobic grandma, or a college kid who is more interested in philosophy than technology, you should no trouble using this camera. There are some manual alterations that you can make through the provided menu, like adjusting the ISO or color mode, but generally speaking, most people are going to stick with auto anyways and hope that the internal computer can punch out the best possible result. The M853 has a relatively slim profile, so the dial on the top used to switch between modes is very much on the small side. Although it wasn’t difficult to rotate the dial, per se, it would have been a lot easier if it was larger. The main modes are favorites (tagged photos), auto, digital image stabilization, close up (macro), scene modes, high ISO, and video. To the left of the dial is the power button and the flash button, both of which are slightly recessed into the body, whereas to the right, you’ll find the standard two-stage shutter button. Picture Quality The resulting photographs were hit and miss. Under good lighting conditions and relatively static subjects, pictures came out bright, vibrant, and full of color. I particularly liked the macro mode as it allowed me to get nice and close to my subjects; food pictures were fine, but you definitely need the flash to prevent any sort of motion blur. Photographs taken under less than ideal locations, as you can probably guess, ended up being less than ideal. I tried taking a picture of an apartment building at night, lit only by the relatively dim street lights and the camera’s flash. I used the digital image stabilization mode, because my hands may have been less than perfectly steady. Every other setting was set to auto. The picture that resulted had an unusable level of noise. Presumably, this is because the camera dialed up the ISO. As is the case of most digital cameras, I’d say that you should avoid the higher ISO settings if possible. The pictures found here were taken with the Kodak EasyShare M853. To see the effect of high ISO settings paired with digital image stabilization (as described above), you can check this post. Conclusion You get what you pay for. With a suggested retail price of $179.99, the Kodak EasyShare M853 is definitely on the less expensive end of the spectrum, despite the fact that it offers a fairly decent feature set. It’s rocking 8.2 megapixels — more than any soccer mom will ever need — as well as 3x optical zoom, VGA videos at 15fps and QVGA videos at 30fps, internal memory, SD memory card slot, and a reasonably intuitive menu. The different scene modes will certainly come in handy for beginning photographers. That said, I was not impressed with the level of digital noise experience in lower light conditions, the long image review after taking a picture (it was not intuitive that I could return to preview mode by depressing the shutter), and the overly small mode dial on the top of the camera. I should also note that no AC/DC adapter was included in the package, so the only way to charge the provided battery is via USB. This might be a pain for travellers. To me, the cons outweigh the pros, but if you’re looking for a high megapixel count on a budget and you’re willing to put up with its shortcomings, the Kodak EasyShare M853 is probably one of the more affordable options out there.