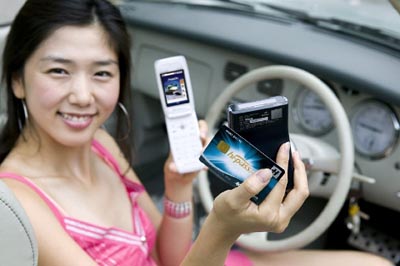 That’s exactly the service that LG Telecom has launched in Korea, allowing drivers to pass right on through toll booths on highways and bridges. Instead of having to sit through a ridiculously long lineup, waiting as each individual car tosses a few coins at a booth, drivers can simply pay their tolls with their cell phones.

LG Telecom calls this innovative service “PassON” and it is linked to the High Pass system that is already in place at the Korea Expressway Corporation. When a car armed with an OnBoard Unit passes the toll gate, the toll is automatically subtracted from the High Plus Card. Apparently this works via Bluetooth somehow.

According to their estimates, this new system will reduce “the time spent at toll gates up to a seventh as well as saving toll both running costs by 23 percent.”