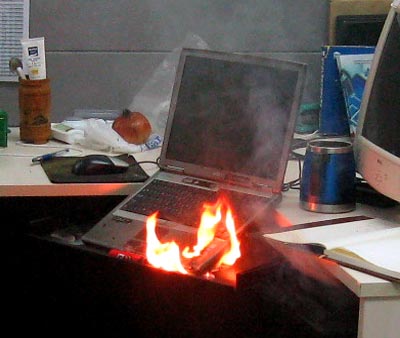 Just when you thought you were out of the kitchen, they throw you deep inside the oven. Turns out that another Dell laptop has burst into flames unexpectedly and by all accounts, it is indeed the battery that is to blame.

As you recall (no pun intended), several laptops from many manufacturers were called back because of the faulty batteries found within. They were known to overheat and occasionally even catch on fire. A massive recall was issued by several companies and then when we thought the smoke had settled, this happens. And based on the picture, it was a pretty nasty fire.

No word on which model or whether it was a recalled unit that never got a replacement battery, but we hear that this computer-fueled inferno took place in Shanghai. Next to the lead-filled toys and antifreeze-packing toothpaste, no doubt.