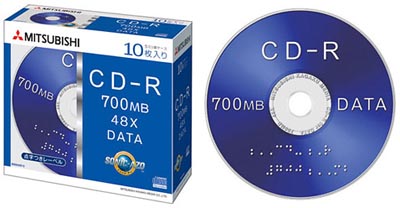 There are several obstacles that blind people have to overcome, so the last thing they’d want to worry about is figuring out which CD they have in their hands. It’s funny, really, that it’s taken this long for developers to come up with some sort of solution, but at least it’s finally here.

Mitsubishi has revealed what we believe to the first set of blank CD-R discs that come with Braille labeling right on the discs themselves. The little bumps — made of two layers of high viscosity ink — do not add very much thickness to the disc (just 0.1mm), so they shouldn’t interfere with the disc reading process. I’d imagine that a similar process could be done for all other optical discs.

Sounds like a good idea. I just hope that the label doesn’t just read “700MB Data”, because that’d be pretty useless.