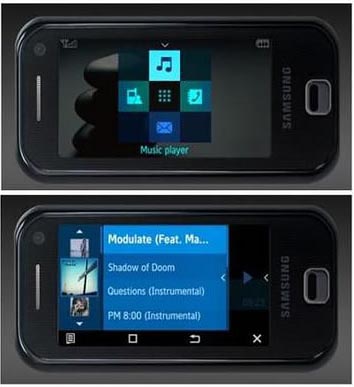 Wow, is everyone making a cell phone to compete directly against the iPhone these days? I thought the iPhone didn’t offer anything particularly novel to the mobile phone game — we’ve seen plenty of full touchscreen phones before — but man alive are there are a lot of handsets that bear an uncanny similarity to the Cupertino handset.

The latest supposed “iPhone killer” is coming by way of Korea and it’s called the Samsung Croix. From the outside, the Croix (don’t ask me how to pronounce that) looks fundamentally the same as the Apple iPhone, complete with a rounded rectangle thing underneath the screen. One critical difference, however, is the the Croix seems to be used in landscape mode most (all?) of the time.

Winner of the iF Communication Design Award 2007, the Samsung Croix features an “intuitive interface through on-screen touch input mapping which supports five different ways of interaction.” Some say that the Croix could simply be the commercial name for the Ultra Smart F700. What do you think?