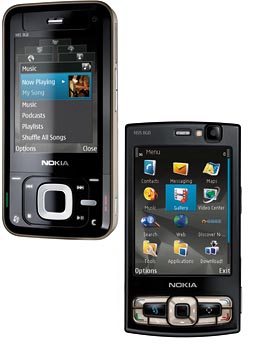 While the Nokia 5310 and Nokia 5610 are perfectly capable of bringing the funk when it comes to the music department, power users will want more and that’s when they’ll turn to these latest Finnish creations. As part of their onslaught of new handsets, Nokia revealed the two versions of the juicy Nokia N81 gaming phone, as well as two variations on the existing Nokia N95 two-way slider.

The Nokia N81 may technically be the successor to the Nokia N80, but there are several significant changes from the older slider. Most notably, the N81 is the first handset to work with Nokia’s new Music Store, it’s the first to be compatible with the new N-Gage services, and it’s got an all-new 3D menu system. The rest of the specs aren’t exactly anything to sneeze at either, with WCDMA (2100MHz) connectivity, a 3.5mm headset jack, stereo speakers, stereo Blutooth, FM radio, 2 megapixel camera, 802.11b/g WiFi, and a 2.4-inch QVGA display. The standard Nokia N81 (350 Euros) will come with a microSD slot, whereas the 8GB model (430 Euros) will — as you can guess — come with 8GB of internal memory.

The Nokia N95 isn’t exactly new, but the Finnish phonemaker has refreshed the platform by creating two new variants. The Nokia N95 8GB gets 8GB of internal storage and a new 2.8-inch QVGA display, whilst the rest of the specs read much the same as the original. It’ll cost 560 Euros. The Nokia N95 US model gets quad-band GSM/EDGE, dual-band (850/1900) WCDMA for American high-speed compatibility, and microSD expansion. Its screen is the original 2.6 inches. Look for the US take on the N95 to sell for $699.