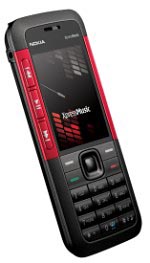 Just as we promised earlier today, Nokia held a press conference to reveal several new cell phones. Here is just one of them. The Nokia 5310 XpressMusic has made specifically for music junkies, making it even easier for them to jam to Bette Midler as they commute to the office or school every morning.

The primarily black candybar phone is offset by vibrant red music keys that flank either side of the color display. SLVR-like in its dimensions, the Nokia 5310 weighs about 71 grams and measures a paltry 9.9mm thick. Because it has been designed specifically for music lovers, you’ll be glad to hear that it rocks a battery capable of blasting out hit songs for 18 hours straight.

In addition to its musical tendencies, the Nokia 5310 XpressMusic also boasts a 2 megapixel camera and a microSD expansion slot good for up to 4GB of extra memory. The 2-inch QVGA display should look quite brilliant with its 16 million colors as well. Nokia plans on shipping this phone at the end of this year with an asking price of about 225 Euros (US$306).