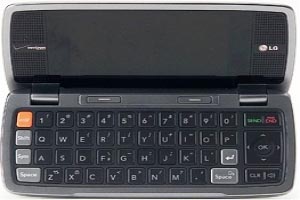 There’s no way to know whether this is an official product photo or not, but all the pieces seem to be in place for the LG VX10000, which will act as the successor to the hugely popular LG enV on Verizon Wireless. As you can see from this reasonably clear picture, the Verizon badging features quite prominently on the left side of the ultra-wide display. There’s also an orange “enV” button at the top-left of the QWERTY keyboard… I wonder what that does.

It’s good that we’re getting a shot of the most important part of the LG VX10000 — the flipped-open insides — but of course we all still want to know what it looks like in its candybar configuration for voice calls. The specific features have not yet been leaked, but we should probably expect an integrated music player, instant messenger, and V CAST capabilities.

There’s probably a camera on the back, and seeing how the enV (VX9900) improved on its predecessor (VX9800) by going with 2.0 megapixels rather than 1.3 megapixels, the VX10000 could very well jump into the 3MP range.