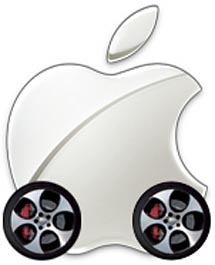 You’ve got to wonder what an Apple-branded or Apple-designed automobile would look like. Given the recent rumors of Cupertino collaborating with Volkswagen, somehow images of a glossy white VW New Beetle come to mind. According to a German publication, Steve Jobs has been chatting it up with VW head honcho Marin Winderkorn, and these talks could be leading us down a path that could birth the iCar.

Of course, given the secretive nature that his royal Steveness tends to take with product creation, we’re not going to hear anything official from Apple until they hold a major press conference to reveal the product, only to place it for sale on the Apple Store mere moments later. You also have to take this report with a serious grain of salt, because while it’s generally confirmed that the two bosses had a tete-a-tete, the actual subject of that conversation has not been confirmed. It might just be something like iPhone integration in new vee-dubs.