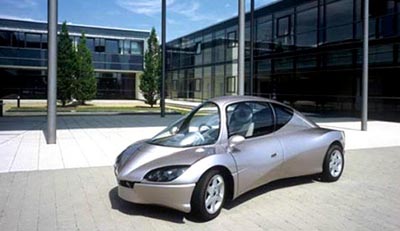 I’m not a big fan of the physical appearance of this car. It has a strange bulbous look to it that just doesn’t jive with my preferences, but just the very idea that it’s a jetcar piques my interest, if only a little. Strangely, the Jetcar Sport II only gets its power from a tiny three-cylinder engine, producing a miserly 82 horsepower. It’s got to be pretty lightweight, but with just 82 ponies pushing this vehicle, it probably can’t outrun a Smart ForTwo.

Several design cues have been included in the Jetcar Sport II to convey a sense of flying a plane to the driver, rather than piloting a commuter car. You’ll notice “an expanded front shield as well as edgewise and backwardly extended side shields.” The shape of the cockpit roof is also similar to what a cartoon fighter jet would look like.

Environmentally-friendly and futuristic, or just butt ugly and a waste of time? I’ll let you decide.