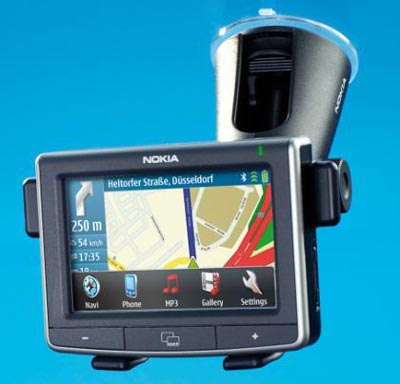 I knew that Nokia’s product portfolio expanded beyond just cell phones. They make Bluetooth headsets, Bluetooth speakers, and wireless Internet tablets like the Nokia 770. What I didn’t know was that they made in-car navigators too. Expanding beyond the GPS offered in the N95 and 6110 Navigator, here is the Nokia 500 Auto Navigation Unit. No, it’s not a cell phone; it’s actually a handsfree personal navigation device, the first from Nokia.

Obviously geared toward in-car use, the Nokia 500 comes equipped with a 4.3-inch widescreen display, turn-by-turn voice directions, text-to-speech for speaking out city streets, pre-installed maps with points of interest, an integrated FM transmitter, and support for TMC traffic service. There’s also Bluetooth on board, allowing the Nokia 500 to double as a Bluetooth speakerphone. Another interesting feature is the ability to instantly call the aforementioned points of interest.

The plan is to launch the Nokia 500 PND for about 300 Euros in Q4 2007, with an American launch following shortly afterwards.