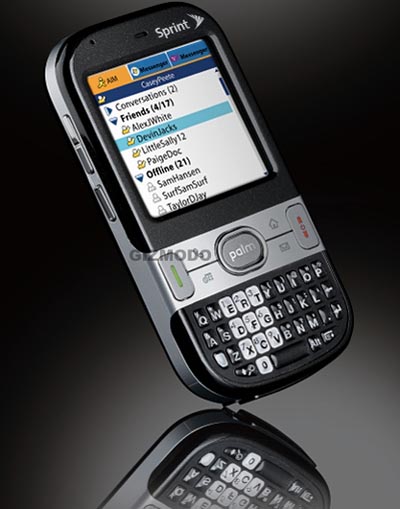 The larger size of the Palm Treo line has one of its biggest (no pun intended) complaints. People want the functionality of the PDA phone but without all that added girth. We’ve been hearing rumors and seeing blurry spy pics of the rumored Palm Centro for a little while now, so it’s nice to finally get treated to what appears to be an official promo shot. This sneak peek was leaked, so don’t expect anyone at Sprint or Palm to officially own up it just it.

As you can see from the picture provided, the Palm Centro (which apparently will not be called the Palm Treo Centro) is reasonably compact, sporting a full QWERTY keyboard, a touchscreen display, and full-speed EVDO. This will be the smallest Palm smartphone to date. The black and silver color scheme looks pretty nice too.

Being “pitched at the youth market”, the Palm Centro could be priced at a mere $99 with contract. Sprint will reportedly have exclusivity on Centro for the first 90 days.