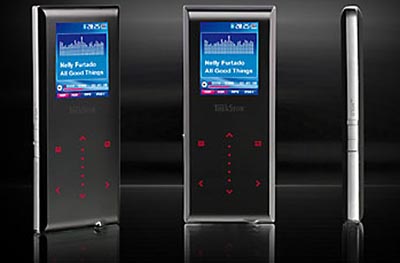 I’m hoping that the department at Trekstor responsible for naming the iBeat Blaxx MP3 player is just ignorant, because if they did this on purpose, they’re going to get some serious backlash from the public. Like, what were they thinking? The name of this product sounds like it could be the IM username of a grand wizard for the KKK. Why would you even think about naming your latest MP3 player I Beat Blacks iBeat Blaxx?

There’s nothing particularly wrong with the thin music player itself. The piano black finish with touch-sensitive red controls and silver frame is quite attractive and much can probably be said about the color display, file support (MP3, WMA, WAV, OGG, SMV, WMA-DRM9) and sound quality, but when its called the I Beat Blacks iBeat Blaxx, Trekstor probably isn’t going to sell too many units. At least in English-speaking countries.

In any case, the Trekstor Blaxx comes with Sennheiser headphones, software, USB 2.0 cable, line-in cable, and a neck strap. The 2GB and 4GB versions are 120 and 150 Euros, respectively.