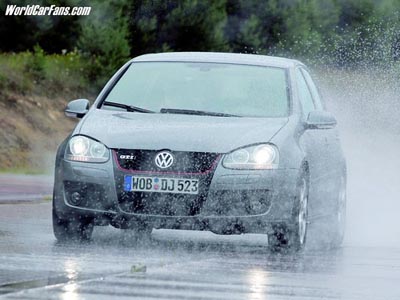 Dubbed ESP plus steering impulse, this new system for Volkswagen cars is designed to help shorten stopping distance by up to 10 percent, particularly in less than ideal situations. To be included standard in Golf, Golf Plus, Jetta, Eos, Touran, and Passat models, ESP plus steering impulse provides “just a little ‘tug’ on the steering wheel” that encourages the driver to countersteer. By countersteering, stopping distance can be substantially reduced.

The system is particularly effective when the two sides of the car are experiencing different friction coefficients, as is the case when you have dry road on the left, but damp leaves on the right. Instead of losing control and skidding all over the place, the ESP plus steering impulse system will keep you on track and stop you sooner.

ESP determines the right direction: The system “detects” the direction in which the driver has to countersteer to decelerate the vehicle optimally without it breaking out.

And it’s not like the car is taking over control of your car either:

The system gives just a recommendation to steer, even if barely noticeable, with a torque of no more than three Newton metres. This is therefore as far as it ever goes: ESP thinks, the person steers – it’s just more effective.