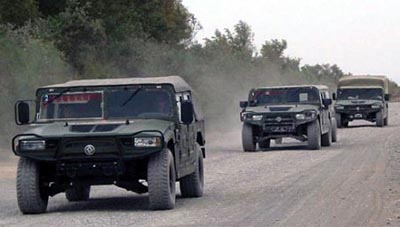 China is known for producing a bevy of copycat cell phones and MP3 players, but is copying a military vehicle going to far? Regardless, that’s exactly what has happened, because Dongfeng of China has produced a new ultra-wide truck called the Crazy Soldier, and by most accounts, it “shares a striking resemblance to the original military truck created by AM General” for the US Military.

Dongfeng has reportedly been working on the Crazy Soldier for four-and-a-half years, developing it specifically for military applications. What’s interesting is that somewhere along the development cycle, they decided that the truck needed a radio and a CD player, and after plunking those in, they decided that they wanted to sell it to the Chinese domestic market.

The price? Knowing how cheap Chinese-made clones are, I’d imagine it’s quite inexpensive. But it probably comes with high-powered magnets and loads of lead.