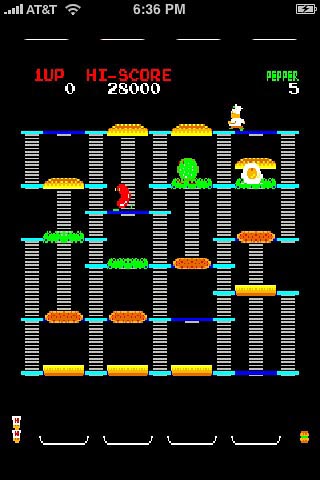 With each passing day, the Apple iPhone is receiving more and more third-party applications. We’ve seen a less than stellar NES emulator, but now it’s time to revisit the smelly, sweaty arcades of the 80s. Some kook named kaisersoze has developed a MAME emulator for the iPhone, granting you access to a wide range of arcade classics on your shiny Apple device.

Don’t get too excited just yet, however, because there are quite a few caveats that you should know about. For starters, the emulator can currently only handle rather simple games like BurgerTime and Q*Bert, so you won’t be enjoying Final Fight or Mortal Kombat any time soon. Also, “performance is an issue.” There’s some frame skipping, lowered sound quality, and other problems.

It’s a step in the right direction, but it’ll probably be a while before you’ll have the equivalent of a Sony PlayStation on your iPhone.