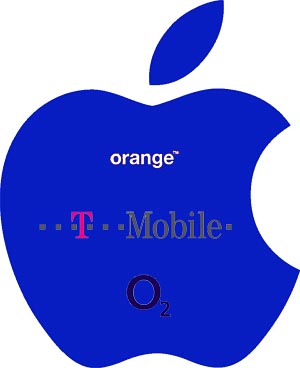 If you’re on the other side of the Atlantic, anxiously awaiting the day when you can surf the web with Safari and flip through your music albums by flicking your fingers, this is certainly some good news for you. Apple has reportedly signed a deal with T-Mobile in Germany, Orange in France, and O2 in the UK, granting the trio the opportunity to be future iPhone resellers.

The official announcement of these partnerships is expected to take place at IFA 2007 at the end of this month. In order to get their hands on the juicy Apple iPhone, however, the three carriers had to give up something rather substantial: over 10% of revenues from the voice and data on the devices must be sent directly to Apple. Given the huge popularity of the iPhone, the deal should still be “worth it” in terms of getting additional subscribers.

What we want to know, though, is whether the Europe-bound iPhone will still be restricted to EDGE or will it get equipped with some totally awesome 3G goodness. Maybe we’ll find out at IFA.