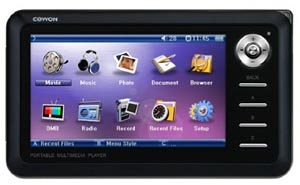 Although Cowon isn’t all that well known around these parts, they do make some pretty great portable media players. Following in the footsteps of the A2, the Cowon A3 PMP comes loaded with all sorts of great features, including support for 1280×720 HD Video on the go. What you see here is the prototype Cowon A3 that was being bandied around at CES 2007 earlier this year. The final version will be shown at IFA in Germany.

Based on Texas Instrument’s Davinci Chipset, the Cowon A3 supports a huge range of file formats, including AVI (DivX, XviD), ASF, WMV, MPG, DAT, MKV, MP4, OGM, and VOB on the video side of things, as well as MP3, WMA, OGG, WAV, FLAC, APE, and AC3 for audio. If the 4-inch WVGA (16 million color) display isn’t big enough on the Cowon A3 for you, it can output the video via component, S-video, or composite connections. The linkage goes the other way too, as this device will do MPEG4 recording from your TV and MP3 recording through the line-in audio.