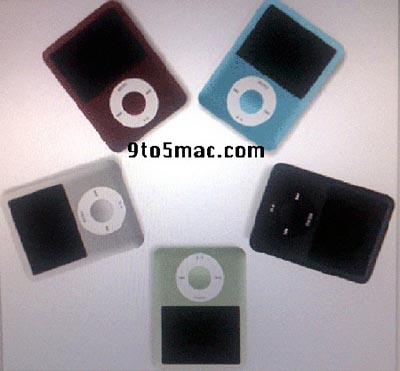 The first generation nano brought us a brilliant color screen and a remarkably thin profile. The second generation brought back the metallic colors of the iPod Mini. What can we expect with the third generation iPod nano? Well, if these sneak peeks are to be believed, it’s going to be even smaller and come in a series of semi-translucent colors.

Obviously, Steve Jobs hasn’t gone on the record to say that these shots are official, but they do seem to point toward what the next generation music player could bring. You’ll still get a white click wheel like the current nano, but it’s hard to tell what the actual proportions of this thing. The screen could very well be like the 2G nano, meaning that this new player is only about 2/3rds the size. That makes for a tiny click wheel.

What do you think of the new look? Yay or nay?