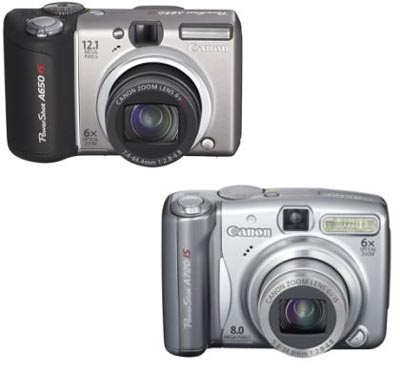 For the average consumer who wants a little more in their digital camera, Canon has just revealed the new PowerShot A650 IS and the PowerShot A720 IS, both of which offer image stabilization to help overcome those shaky hands of yours. Interestingly, although the A650 has a lower model number than the A720, it is the one that boasts more megapixels.

The Canon PowerShot A650 IS comes with 12.1 megapixels of goodness, 6x optical zoom, 21 shooting modes, a 2.5-inch preview LCD, and an ergonomic grip so your hands don’t get tired from long shooting sessions. You also get Genuine Face Detection and support for SDHC memory cards. Retail price is $399.99.

The lower Canon PowerShot A720 IS is much the same as its bigger brother, except it’s got an 8 megapixel image sensor instead. Other vitals include a DIGIC III image processor, VGA resolution videos, an the usual simple control layout. Price has been set at $249.99.