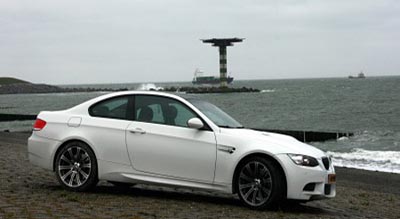 We’ve been following the development of the 2008/2009 BMW M3 quite closely, most recently getting treated to an in-depth look at the production-ready model. Pictures can be fun and while I think the new M3 looks great, we all want to know how this beast performs. Thankfully, the guys at Autoblog.nl have snagged a video of the 2008/2009 BMW M3 as it was tearing it up on a road test. That exhaust note really is music to the ears.

The 2008 M3 (E92), in case you didn’t know, will get powered by a huge 4.0L V8 engine that develops a formidable 420 horsepower and 295 lbs-ft of torque. You also get a tuned suspension, carbon fiber goodies, and a six-speed manual transmission.

But enough talk. I’ll let the video speak for itself. Time to start saving those Deutsche Marks!