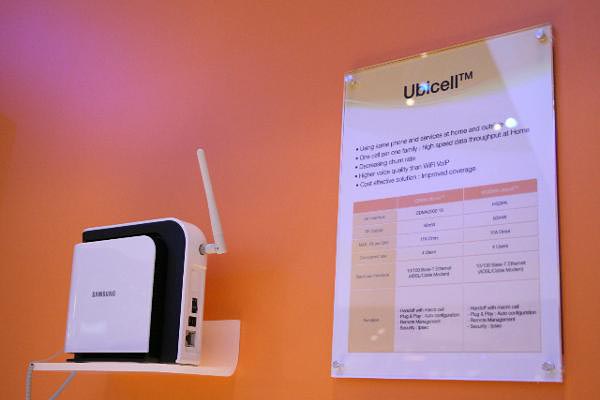 T-Mobile isn’t the only one letting you make cell phone calls through a WiFi connection. Sprint has jumped into the Internet-based game too, and better still, they don’t restrict you to WiFi-enabled cell phones. What makes Sprint’s new service different than [email protected] is it can be used with any Sprint handset. Yes, any handset.

In order for it to work, you’ll need to grab the Samsung Ubicell, which acts as an intermediary between a broadband Internet connection and your CDMA-equipped cell phone. The router-like device effectively transforms into a Sprint cell phone tower, sending out 5000 square feet of reception.

The Samsung Ubicell will pair with up to 3 mobile phones at a time, working over a local CDMA channel. You make a call on your phone via CDMA, it gets sent to the Ubicell, the Ubicell sends the info to Sprint via the Internet, and your call gets connected on their end. It’s, like, magical.

And just like T-Mobile’s version, the Sprint Internet-based mobile phone service is apparently unlimited, letting you make as many calls as you want for a set rate each month.