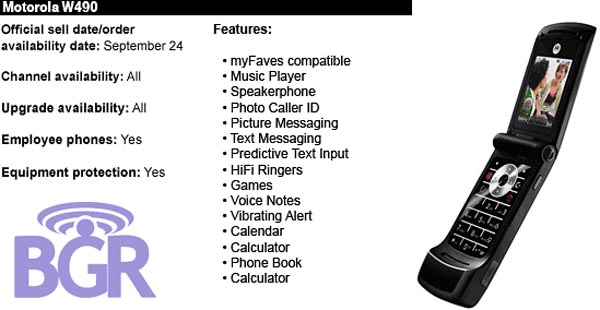 Motorola’s not quite ready to give up on the RAZR clamshell form factor and neither is T-Mobile. In fact, the latter is launching a pair of new handsets next month with that popular skinny flip look.

First up, we have the Motorola W490 (shown below). Set to ship starting September 24, the W490 is perfectly myFaves compatible, as can be expected, and it comes equipped with a built-in music player, speakerphone, and predictive text input. The W series from Motorola has typically been pretty basic and so the W490 lacks Bluetooth and a camera. Bummer. At least it looks good.

Secondly, we have the Motorola V3 06. This phone is even less exciting. It’s not the RAZR 2 that everyone has be jumping up and down about. Instead, it’s a very minor upgrade to the original RAZR V3, only tossing in some EDGE support and that’s about it. You still get myFaves love and HiFi ringtones, but strangely there’s no mention of Bluetooth or a camera here either.