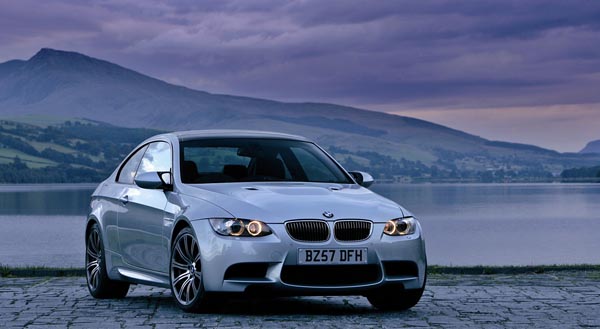 The new BMW M3 concept was revealed at the Geneva Motor Show just a short while back, but guess the Autobahn-loving automaker is anxious to get this new beast on the road, because here is a huge gallery of pictures of the production model. The concept and the production version of the new 2008-2009 BMW M3 are very similar, as can be expected, and most of the most important elements remain unchanged.

Under the hood, you get a ridiculously powerful V8 engine, supported by a tuned suspension, six-speed manual transmission, a carbon fiber roof, and yes, that signature M3 badge on the backside. The aforementioned V8 brings two more cylinders than its predecessor, but it is actually lighter. This powerplant pumps out 420hp and 295 lbs-ft of torque from its 4.0 liters of displacement.

The new BMW M3 — which will launch in North America in mid-2008 as a 2009 model — will compete directly against the Lexus IS-F, Audi RS5, and Mercedes CLK63 AMG. They expect to create sedan and convertible versions for later in 2008.