I tell my friends that my T-Mobile MDA is just as powerful a desktop PC from about 10 years ago and they scoff at me and my mobile solitaire. Although the QWERTY keyboards on smartphones and Pocket PC devices have improved significantly in recent years, they’re still quite small and typing on them just isn’t the same as full-sized computer keyboard.

We’ve seen laser projected keyboards before — the types that beam a virtual mass of QWERTY onto a flat surface — but now Celluon is letting us enjoy that keyboard via USB. Previous versions have mostly relied on Bluetooth, and slower versions of Bluetooth at that. As such, the typing would occasionally lag and the response wouldn’t be nearly as good as you would hope. A direct USB connection should be speedier, but because you’re receiving zero tactile feedback from your desk, I’d imagine typing on this laser projection will still be pretty darn weird.

Celluon promises that their laser keyboard will be compatible with Windows Mobile, Palm OS, BlackBerry, and Symbian, as well as Windows 2000/XP/Vista. 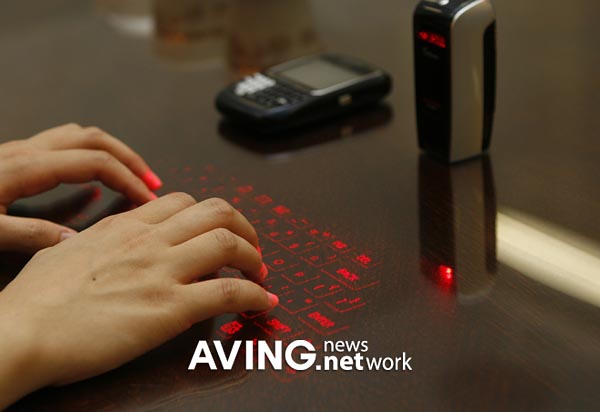