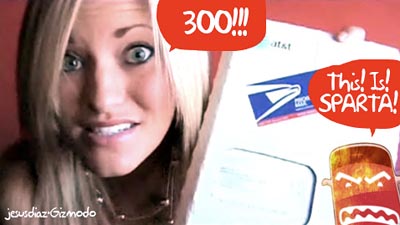 Everyone is jumping over backwards in excitement over receiving an iPhone. It may not be the best device on the market — NASA can attest to that — but it’s got to be one of the most attractive. But about when you receive that bill at the end of the month? What could possibly warrant a bill that takes up 300 pages and actually gets sent in a box rather than an envelope?

Well, those questions were asked and, in turn, answered by the beautiful Justine. You may know here from JustineTV, but even if you don’t the video embedded below is certainly worth a gander. Yes, her first iPhone bill from AT&T was three hundred freaking pages.

Anyways, if you’re interested in why her bill was 300 pages, check out this transcript:

Addy: Was that more use than your Treo?
Justine: That’s about average of what I’ve have on my Treo, which I still haven’t got rid of it. Thankfully this bill didn’t take into account the texts I still recieved on that phone of we’d have a few extra pages for sure.

Addy; So how much was the total?
Justine: The bill came to $274.81. Supposedly I have unlimited text/data so most of the charges I’m assuming were activation and a prorated bill. That’s what it looks like anyway!

Addy: And how much did it cost AT&T to send that monster?
Justine: As far as sending the package, I ripped off the label, but I think it was around $7 to send.