I’m not really sure if the guys at AMD should be laughing it up or if they should be cowering in fear. Orange County Choppers has partnered up with Intel to create what has come to be known as Satan’s ride. It may not be emblazoned in red flames, but this motorcycle is one bad-ass two-wheeler and it ain’t taking any prisoners.

The hog has plenty of power, both in terms of horses and processing, because it comes equipped with four dual V-twin motors and multiple, yes multiple, Intel quad-core processors. The computing side of things includes two rearview camera displays, various virtual gauges, StreetDeck Infotainment, the funky speedometer, and even a bloody web browser. Just don’t try to surf Google while riding down the road, mmmkay?

To start up the bike, you don’t have to do the usual thing with turning a key. Instead, you place your finger on the biometric fingerprint sensor and punch the virtual ignition button. The kickstand control is also done via a virtual button on the screen. It may not come with flames, but this bike is hot, hot, hot. 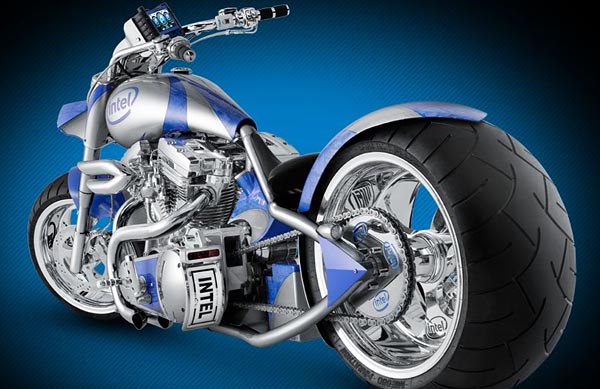