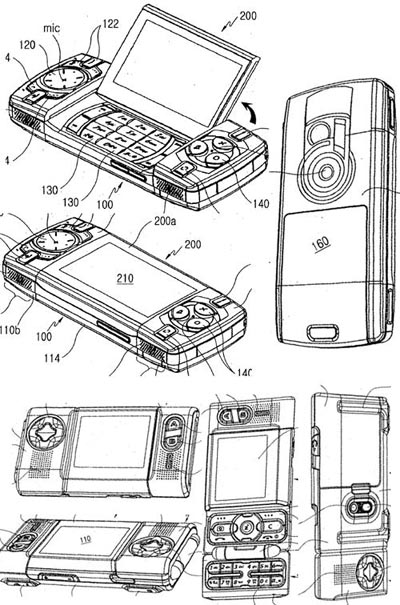 With the continued success of the Nintendo DS, other manufacturers are hoping to make a big splash in the mobile gaming market. Up until now, cell phone games have been lackluster at best, offering a casual diversion while you wait at the dentist’s office. While the Nokia N-Gage didn’t fare as well in the marketplace as they had hoped, other cell phone makers may be giving the gaming phone idea another whirl.

Two patent applications from Samsung have been leaked on the internet, both of which point toward a cell phone whose primary purpose is mobile gaming, with the actual telephony side of things playing second fiddle. In the first patent (the one on top), you see that the form factor is similar to the Motorola Zante in that you hold the phone horizontally and the screen slides up. In its closed position, you get a near PSP-like feel.

The alternative, as depicted by the patent drawing closer to the bottom, is to have the end of the phone flip open, sort of like the Sony Ericsson P990i. In both cases, you can see how gaming takes precedence, but the numeric keypad is still easily accessible.

What do you think? Would you buy a Samsung video game phone like these?