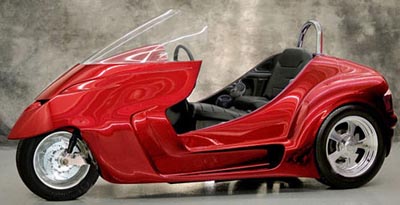 What happens if you take the T-Rex and completely turn it around? That question has now been answered, but I’m not exactly a huge fan of the response. The Stallion by Thoroughbred Motorsports is a three-wheeling vehicle that’s supposed to provide the creature comforts of a car while dishing out the fuel economy and fun of a motorcycle. I haven’t ridden or driven one, but it sounds like it fails on both fronts.

Unlike the T-Rex that has two wheels in the front and one in the back, the Stallion takes on a more traditional tricycle configuration. Under the hood, you get a 2.3L four-banging engine that develops 150 horsepower. Because it’s supposed to be pretty lightweight, I’d imagine the 0-60 time would be fairly impressive. Also unlike the T-Rex, the two people in the Stallion sit front-to-back like how they would on a bike, rather than side-by-side like in a car. While doing 45mpg on the highway (35mpg city), the Stallion will keep you nice and cool with its air conditioning.

The Stallion retails for a very hefty $30,000. Ah, the price people pay to be different.