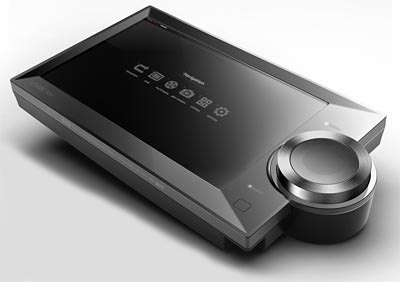 Easily the most noticeable feature on the recently revealed iRiver NV — we previously new this device as the M10 — is the large rotary knob on the right which is used for most of its navigation. Speaking of navigation, the iRiver NV features SiRFStar III technology, granting you unparalleled GPS navigation.

But wait, there’s oh so much more in this incredibly beautiful package. In addition to getting you around town in the right direction, the iRiver NV also boasts an integrated DMB-T tuner, FM tuner, and a built-in multimedia player that supports a wide range of formats. It’s got love for DivX, Xvid, and H.264 right out of the box, for example, as well as AVI, ASF, WMV, MPG, DAT, MP3, WMA, OGG, AC3, and BSAC. The iRiver NV also has a pair of SD expansion slots and a 1.3 megapixel camera.

On the downside, we have a feeling that — like most great electronics — the iRiver NV is being restricted to the Asian market, at least for now.