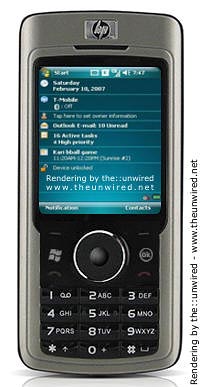 For those of you in the audience who are a fan of conventional candybar form factors, but prefer more functionality than what regular old cell phones can offer, HP has got a couple of business-minded creations that just might fit the bill. The recently announced HP iPAQ 600 and iPAQ 900 are Windows Mobile Smartphones, and detailed specs on both have now been released.

The iPAQ 600 series will feature high-speed 3G connectivity (UMTS/HSDPA), quad-band GSM/GPRS/EDGE, WiFi, and Bluetooth 2.0, as well as integrated GPS to help you get around unfamiliar territory. What’s more, we hear that the candybar will come equipped with Windows Mobile 6 Professional. Controls come by way of a normal 12-key numpad and an iPod-like touch sensitive navigation wheel. Rounding out the feature list are a Marvell PXA270 processor (520MHz), 128MB RAM, 256MB ROM, and microSD expansion.

Details surrounding the iPAQ 900 series isn’t quite as obvious. Said to still be a “work in progress”, this phone is rumored to have similar features as its iPAQ 600 series cousin, but it’ll rock the QWERTY instead of a regular keypad.

A more formal announcement is expected in September with the launch following later in the year.