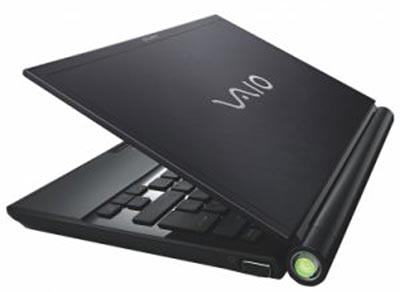 There’s a continual push away from the spinning platters of old and the solid stateness of new. The Sony VAIO TZ18GN is an 11.1-inch ultraportable notebook that comes equipped with a SSD, instead of a conventional hard disk drive. Because they’ve gone with solid state memory, this Vaio is said to be faster, lighter, and more power efficient than its HDD-based predecessor.

The VAIO TZ18GN weighs just 1.15 kilograms and boasts a very formidable battery life of 11.5 hours on a single charge. They say that this is about a half hour more juice than the HDD notebook. On the downside, you’ll be sacrificing a fair bit of storage, because this laptop only comes with a 32GB SSD, rather than the 100GB HDD you would normally get.

Other vitals include an Intel Core 2 Duo processor, 8x DVD-DL burner (no Blu-ray), Windows Vista, and 1GB of RAM with the (heavily recommended) option of upgrading to 2GB. The price is a little out there at US$4,299, which works out to be a $700 premium over the model with a 100GB HDD.