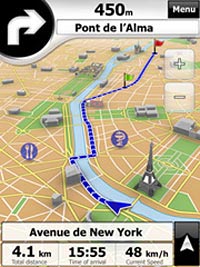 I’m not really sure what’s so radically new about this interface, but Mio is saying that the upcoming C620 portable GPS unit will come with funky new software that adds even more data. The in-house developed MioMap 2008 interface will be running on the C620, giving you more data, “and more dynamic data about the route ahead.”

We’ve seen three-dimensional mapping on GPS handhelds before, but Mio’s latest offering will boast “a detailed representation of the map with more natural perspective and 3D style cues, including color-coded parks and major landmarks.” The sample screenshot provided shows that we’re in Paris, apparently, with the Eiffel Tower just on the other side of the water.

The screen can also split to provide MP3 player information, but very little is known about the Mio C620 GPS at this time. We can tell you that it will have a 4.3-inch touchscreen and a variant may in the works that has Bluetooth. More info is expected at IFA Expo in Berlin at the end of this month.